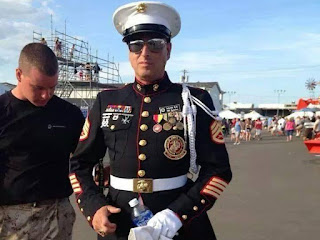 This article was originally published on the author's LinkedIn profile

As a veteran of the USMC I take serious exception to people who claim veteran status, or claim to have served in certain units, or been given certain military awards, which they didn't actually earn.

The picture above, as cited on the website TaskandPurpose.com, is Michael R. Schrenk, 47, dressed as a laughably poor fake Marine, next to a real Marine at the Erie County Fair. Feel free to follow the link above to see why they called him "The Worst Fake Marine of All-Time."

My own military career was relatively undistinguished. I never got shot at. I didn't have to shoot at anyone. I didn't even leave the USA. I earned a Good Conduct Medal, some meritorious promotions, and a few Meritorious Masts. Still, I am proud to have served and although I never had to hear a shot fired in anger, I was prepared to go into harm's way if I had been required. And, I have a deep and abiding respect for those who have "seen the elephant."

Lately, I have been interviewing job candidates for data analyst and business analyst positions. The other day, I saw a resume which made me want to scream! I call it "borrowed glory" when the candidate includes psuedo accomplishments in a resume, but the real accomplishment was done by someone else.

The key words that give away this sort of borrowed glory in a resume are:
"Involved in"
"Participated in"
"Worked with" or "Worked on"
"Met with"
"Collaborate with"
"Engaged"
"Helped with"

One resume I received had nearly 40 of these useless 'accomplishments' listed. And, they weren't made any more impressive by adding opinions in the form of adjectives such as, "collaborated extensively..." and "Worked closely...".

Nearly as useless as these verbs are in telling what a candidate has actually done are "served", "coordinated" and "utilized."

To add more to the fluffy-filler of the resume, the candidate included bullets explaining the nature of the projects among the bullets listing the candidate accomplishments.

I can only infer that the job seeker thought that volume would make up for lack of quality in the bullet points listed in his resume. Perhaps he thought that the nature of the projects where he was a participant would so impress me that I would perceive him to be so skilled and knowledgeable that I would feel compelled to interview him. And, that in the interview he could wow me enough to overlook the steaming pile of manure that he had served up in his resume.

Anyone who has been in the workplace very long knows that every team has participants. A few of those participants are real contributors. And, that in spite of the drag on the team from participants, the contributors manage to actually get the work done and deliver results.

Your resume has exactly one purpose, to get you an interview. If it isn't getting interviews for you, then you need to examine it very carefully.

If your resume peppered with pieces of fluffy-filler, get rid of them. They aren't doing you any favors.

This candidate never got an interview from me. I wasn't about to waste my time talking to a participant. I am only willing to consider hiring contributors, the people who deliver results.

Perhaps I am more critical than many hiring managers. But, do you want to count on that when it comes to getting the job you want?

His books are the results of decades of interviewing, hiring and firing people as well as coaching job seekers, preparing resumes and cover letters.