I have recently had the 'pleasure' of interviewing candidates for positions as project managers on the same contract I am currently working.  My recent experience demonstrates that in spite of my books and others out there, people continue to mess up their chances for a job by either doing the wrong things or doing the right things the wrong way.

I am going to share some real-life, current examples of resume mistakes that prevent job seekers from getting an interview and then some interviewing problems that keep them from getting a job offer.
Of course, I have changed the names to protect the guilty.

Ms. Mia (or should I say, MIA?) – her most recent experience was left off of the resume. Since her resume was redone on the recruiting company letterhead, I can’t say whose fault this was, but it didn’t help her case.

When we asked, are you still with Company XYZ?  She had to say, "No.  I have been at ABC since 2014."  My reaction was, "Oh!  Well then, tell me about what you are doing for them?"
The bad news about that is that with very limited time for an interview, we chewed up valuable talk-time which could have been avoided if I had seen the position in the resume.  Then, I could have asked specifically about anything in that experience that seemed relevant.

Unfortunately for Ms. Mia, having the up-to-date resume wouldn’t have made a difference, because Ms. Mia had interviewing skill issues that kept me from moving her to the next round of interviews.
Her resume had indicators that she might be qualified for the role, which is why she got the initial interview.  Her problem was that during the interview she failed to articulate her answers in ways and words that made it clear that she had actually worked in the same kind of role I was looking to fill.  This left me uneasy and without a clear understanding of her skill set.

Mr. Nickels – After looking at his resume, I wouldn’t consider him for this role.  He had PM experience but not at the right level.  His budgets were $1.5mm to $2mm.  This is not comparable to the $10mm+ level of experience/impact/seasoning that is needed for a PM in where I am working right now.

In this case, Mr. Nickels didn't do anything wrong.  His resume gave me the numbers I needed to know  that he would not be a good fit.  I know from situations where it has occurred that hiring a person into a role that is too far above their skill set level is bad for everyone.

I remember the first time I experienced this.  In spite of my reservations (which was really just a gut feel which I couldn't clearly articulate), my teammates decided to hire a new team member.   Within weeks (literally less than a month) she began to fail because her skills were a match in type, but not in level for the job.

She protested that she could bring in her deliverables in three months, not the three weeks the timeline called for.  All the rest of the team members could meet those deliverables in that schedule, because their game was that much better (higher level) than hers.

We had to manage her out, which is a painful HR nightmare for everyone involved.  And it is one I am not eager to repeat.

The woman in question suffered financially and emotionally from the process and our team suffered from the lost productivity and missed client expectations from her sub-level performance.

So, I learned how to match both skill set and level of skill to positions.  I also learned how to discern it in resumes and uncover it in interviews.

Mr. Fantastic – I might have interviewed him based on his resume.  But if his “multi-million dollar … complex healthcare systems” project listed in his most recent experience turned out to have a budget of less than $10mm, I would have wanted to end the interview right then.

What really kept me from wanting to interview him was his liberal use of hyperbole in his resume.

He had “Excellent” skills – excellent compared to what – a shoe shine boy?

He had a “razor sharp focus.”  Is anyone going to confess to being unfocused in a resume?

He would “skillfully apply” – would any candidate note a skill in their resume that they applied clumsily?

I suggest you purge your resume of these kind of adjectives and adverbs.  They convey ego, not facts.

Ms. Madeup - Ms. Madeup is not a specific person, rather she appears in many resumes in the form of something referred to as "resume inflation."  Resume inflation most commonly occurs in two ways:

1) Your resume summary or skills list mentions a skill set, but your resume experience (and maybe your actual experience) does not reflect any role where you actually had to work in roles that required that as a primary skill set.

Often this happens because they held roles that may give them some PM skills, but it is not the same as actually having the PM role.

Many of these are people who were asked to act as the PM while also working as an individual contributor in the project.  Experience has shown that people in this situation are exposed to PM deliverables and skills, but have not had the opportunity to develop those skills to the level required to manage a project of significant size and complexity.   They are an entry level PM, at best.

Resumes that lack facts
Resumes that are laced with "excellent skills" often lack cold, hard facts.  Facts and numbers tend to tell their own story and often your willingness to put out your numbers for all the world to see suggests a level of confidence and self-awareness that is too frequently missing in job applicants.

I suggest that you put cold, hard numbers into your resume wherever possible.

Instead of saying, “large, complex multi-million dollar projects” provide some numbers.  For example, “Project Manager for Project X, consisting of a team of 14 top-level executives from across the enterprise, bringing approximately 300 team members from their organizations to work full-time and part-time on this project.  Budget of $15mm with projected (or realized) $300mm profit lift to corporation.”

And When You Get an Interview
Okay, if you managed to avoid those resume pitfalls and you actually got an appointment for an interview, now, you need to do a few things to nail it in the interview.

If you are  unable to quickly and clearly cite specific experiences that answer interview questions your actual experience will remain unknown and you are unlikely to progress to an offer.

Consider your answers carefully and listen to the questions you are asked.  Even when asked a hypothetical question (e.g., “how would you …?”), instead of saying what you would do, you should respond by pointing to a specific instance in your experience where you handled this kind of situation.  You should explain the situation, what you did, and what resulted from your actions.  Even for interviewers who habitually ask these (in my opinion worthless) hypothetical questions, answers that highlight actual experience over theory are more impactful.

When a candidate tells me what they “would do” or “typically do” (the latter is slightly better), they are talking theory rather than experience.  They might be using Google while on the phone to scan the highpoints from an online article to answer the question, or they may be relying on what they learned in a class.  In either of those instances, they are talking theory because they have never actually done it.  When the candidate says what they “typically do”, that is a stronger response, but it still lacks the validation that comes from telling about a relevant experience and what they actually did do.

Avoid using “we-speak”.  You should be very clear to delineate what the team (“we”) was asked to do, and what you (“I”) did.  I know that we are all indoctrinated in team mentality and not hogging glory, but you are being hired, not the team.

Personally, when a candidate consistently says “we”, and fails to tell me what “I” did, I read that (right or wrong) as someone who is trying to benefit from what others on the team did, regardless of how little the individual actually contributed to the success of the endeavor.  We need individuals who can pull their own weight, not people who rely on others in the team to make up for their weaknesses.

Tom Sheppard has helped hundreds of people to get and keep the job they want.  If you would like personal help from Tom in your job search needs go to www.ResumesByTom.com. 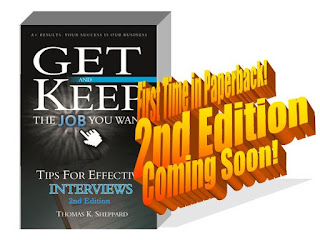