Killing You Softly: Five Ways to Blow an Interview 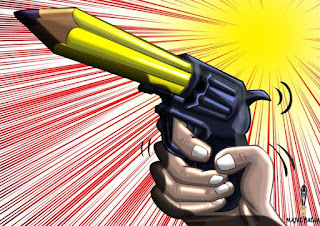 Five Ways to Blow an Interview and Two Ways to Nail It.

Recently, I have found myself back on the hiring side of the job seeker table. This has given me a fresh opportunity to observe first-hand mistakes that job seekers make with their resumes and during their interview process.

While my recent experience has revolved around interviewing Senior Project Managers, people who specialize in managing multi-million dollar projects that have enterprise-wide impacts, the mistakes I have seen made by some of these job seekers (mostly experienced consultants) are surprisingly rookie errors.  Errors that any could make. Errors that everyone can avoid.

In each case, these errors eliminated the candidate from further consideration for the role.

To be clear, each of these candidates was only the subject of a phone interview.  Unfortunately, the phone interview was used to decide which of them would be invited to participate in a video interview, or a face-to-face.  So, some of these errors are specific to phone interviews.

Error #1 - Focus on the interview.  One candidate blew his chances by clearly not being focused on the interview.  From the background noise it was clear the candidate was in the car.  That in itself isn't a killer.  But, it seemed he got in and out of the vehicle, creating distracting noises.  And, he may have muted the line temporarily to order his lunch at a fast food restaurant.

We didn't hear the lunch order, but we could clearly hear all the background noise that sounded like a fast food restaurant.

It was clear to all of us on the other end of the line, that the candidate was putting an higher priority on getting his lunch rather than getting this job.  Considering that the role comes with a six-figure annual pay, that seems a bit short-sighted.

If you are doing a phone interview, get to someplace quiet.  If you are in your car, find a place to pull over and give the interview your full attention, while keeping the background noise minimized.  Show the hiring team (or manager) that you value their time and the potential role enough to give it your full attention.  Even if that means missing your lunch.

Error #2 - Failure to answer the question.  This one was made by Mister Fast Food as well.  When I asked him a question about dealing with difficult or demanding people, he described a standard change control process.  When I asked the same question a different way, I got the same answer.

Really?  I confess I have never considered using a change control process as a means to deal with relationship management issues.  Maybe the next time my wife says we need to do something different, I will have her document her request, and then I will advise her of the pros and cons as well as the cost and schedule implications of her request.  I'm sure that Mister Fast Food actually does this in his life, right?

Focus on the question that is asked.  If you don't understand the question, ask a clarifying question to be sure you are on the right track.  Then give your answer.

If you get two versions of the same question, chances are that you didn't answer it the first time.  So, you need to use one or more clarifying questions to be sure you understand what your interviewer is truly asking.

Error #3 - Asking Irrelevant Questions. The role we have been interviewing for is for a Project Manager to help gather business requirements.  When the candidate asked about the technical architecture of the target system, it was a red flag that he was focused on the technology side, not the business side of the situation.  His failure to understand where the role was aligned, knocked him out of the running with just one irrelevant question.

Error #4 - Using Team-Speak.  I had to stop several candidates in mid-answer because of this error.

We are so indoctrinated in corporate America against tooting our own individual horns that we often talk about what "we" do at work.  As I have pointed out in several of my books, when you are interviewing the prospective employer is hiring you, not "we".

So, when the prospective employer asks, "what did you do?" Make sure your answer is appropriately focused on what "I" did.

As an experienced manager, I can tell you than when I keep getting "we" responses after trying to focus a candidate on the "I", my conclusion is that the candidate didn't actually do anything and is trying to take credit for the work of others by association.  At that point, no matter how much longer the clock runs, the interview is done and you are not going to get the job.

Give credit to teammates where it is due.  And make sure, when interviewing, that you claim the credit that is your due.

Error #5 - Resume Problems.  One candidate was hindered because the resume we received ommitted any references to any experiences since 2010.  After the interview was over, the "head hunter" provided an updated resume.  But, it was too late by then.  You only get one chance to make a first impression and this guy's resume made a bad one.

Make sure your resume is up to date.  And, make sure your prospective employer has your most current resume.   Don't assume someone else handled it correctly for you.  Get it right, in advance.

The Right Stuff #1 - Resume-based Responses.  One of the most impressive candidates got the green light for the next round because of what she did right in the interview.  Her answers referred to specific experiences in her resume.  She noted the project and the employer, described the situation that related to the question, and then told  us clearly what she did and how it worked out.

When I am considering a project manager, I need to understand the breadth and depth of their experience.  Key indicators I use are the number of people on their project team and the size of the project budget.    Because of my experience, I know that project managers whose biggest budget has been $1 million or less are in a different category than those who have led projects with budgets in the $10 million to $200 million range.  And those whose projects have never exceeded $500k are in another (lower) category.

When I am looking to bring on a PM to run a project, or even a piece of a project, that has a $10 million  or more budget, I would be irresponsibile to make an offer to someone who has never played above the million dollar line before.  And I would likely not be doing them, or me, any favors.  That project manager would likely be in way over his or her head and would likely go down in flames.  And could take the project (and me) with them.

The cold hard numbers in the candidate's experience give me the warm-fuzzy feelings I need to move ahead when considering whether or not to make an offer, or move things to the next stage and bring them in for a face-to-face.

This fact of cold hard numbers is true in almost any role, from flipping burgers to selling products, to managing clients.

Consider two burger-flipping candidates:
#1 says she had worked for several different restaurants as a fry cook.

#2 says she has worked for several different restaurants as a fry cook.  She typically had to handle up to 200 orders per hour at peak times and typically earned a 99% accuracy rating from her employer, having less than 1% returns on orders.

When you press #1 for numbers, her first response is "I don't know."  When you push for estimates, you find out that she was comfortable handling up to 20 orders per hour, 40 at peak.  When you ask about returns, you get a "sometimes" answer.

Which do you want to hire to work in your restaurant?

Now, look at yourself.  Consider the numbers that reflect the quantity and quality of the work you do.  Identify them.  Track your  performance.  And make sure you bring out those numbers when the time is right in your next job interview.  Get those cold, hard numbers to work for you.

Tom Sheppard has helped hundreds of people to get and keep the job they want.