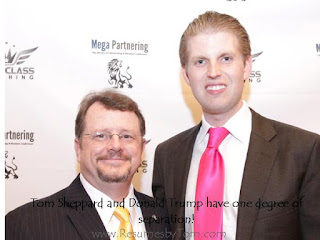 Earlier this month, when both Ted Cruz and John Kasich suspended their bids for the Republican nomination for President, billionaire businessman Donald Trump became the only Republican candidate still pursuing the nomination of the party to run for President of the United States (POTUS).

That put me in a very unexpected position with just one degree of separation between me and the man who may be the next POTUS.

And what separates me from Donald Trump is Donald's son Eric Trump.

I have met Eric several time at business conferences where we have shared the stage.

Eric has always been there for just one purpose. To make money, not for himself or his father, but for St. Jude's Children's Hospital in New York.  From my perspective he has been a tireless supporter of this charity.  And, I have personally witnessed him help to raise hundreds of thousands of dollars for the hospital.   He raised the money from entrepreneurs and business owners, capitalists.

What does all this have to do with you getting and keeping the job you want?

When you willingly give your time, your money, or both, to a cause that is bigger than yourself, it makes you a better person.  And, being a better person makes you more attractive to potential employers.

If all I knew about Eric Trump is that he is the son of Donald Trump, I might make all sorts of erroneous assumptions about the man, his character, and even his father.  Having met Eric on several occasions, and seen him in action, I can tell you that he isn't afraid of hard work, and he willingly gives of his time and money to a worthy cause which is bigger than himself.  In short, he uses the advantages his name and family give him to help others who cannot repay his help in any way.

If I were looking to hire Eric Trump for any position, his charitable work would play a significant role in my consideration.

Likewise, when I look at a resume of a potential job candidate and they include references to their volunteer activities, it immediately lets me know that they are not a one-dimensional person.

As an individual, it helps you to keep perspective on your own life when you are actively engaged in helping others, whose lives are not as good as your own.

Also, your volunteer experience can often give you opportunity to take on responsibilities which are much greater than you have at work.  This is one of the best ways to get experience to back up your push to get the job you want.

PS: If you need help on your resume or job search, drop a line to me at Info@ResumesByTom.com.  I will be happy to help you.  The first consultation is free.


Tom Sheppard has helped hundreds of people to get and keep the job they want.  If you would like personal help from Tom in your job search needs go to http://www.resumesbytom.com/p/products-and-services.html